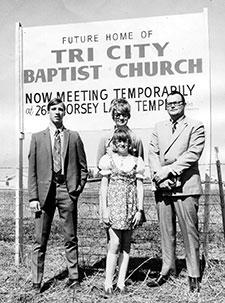 Pastor James Singleton began Tri-City Baptist Church (TBC) in November 1969. The first service consisted of three families meeting in a living room in Tempe, Arizona. TBC is an independent, soul-winning church upon which many ministries have been established:

Learn More About Us

THIS WEEK AT TRI-CITY

To view this week’s church bulletin, please click the link below.

The weekly sermons preached are available in both audio and video formats. They are available live and also archived so that you can access them at your convenience and meditate upon the Word throughout your day and week.

Use the Member Portal to view your giving statement and change your personal information.